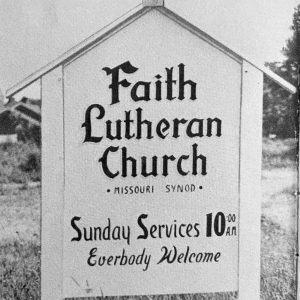 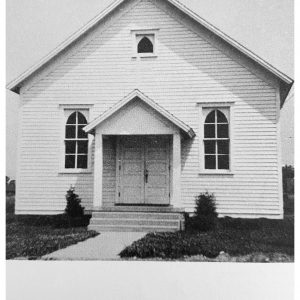 On Christmas Day, 1947, 117 Lutheran people gathered for the first service of ‘The Lutheran Mission of Bridgeport.’  The building was an old frame school house, a gift of St. Lorenz Lutheran Church in Frankenmuth.  On February 13, 1948, 34 communicants officially organized as FAITH Lutheran Church in Bridgeport.  Rev. Edward Kuehnert and Dr. Einar Anderson gave pastoral leadership the first year and a half.  On July 24, 1949, the Rev. Clifford Brueggemann was installed as first resident Pastor.  By early 1954, FAITH with 220 members voted to build a new church.  Since then a Fellowship Hall was added and a couple renovations have been completed as well as adding stained-glass windows. The Rev. Norbert Mueller served FAITH for about 10 years.  The Rev. Lawrence Witto was Pastor for over 20 years and the Rev. William Hessler also served over 20 years.  During most of these 70 years, FAITH has hired a teacher who teaches at St. Lorenz so our children may attend there.  Robert Schollmeyer served FAITH 30 years in that capacity.  FAITH has an active Preschool/Childcare program so they can better serve their community.

The building, formerly the King Road Public School, was purchased and donated by St. Lorenz Lutheran Church.  It was moved in August of 1947 to Maple Street on the seven lots purchased by the Mission Board.

The Lutheran Church of Bridgeport was the temporary name of the chapel in which 117 Lutherans gathered for the dedicatory service on Christmas Day, 1947.  The Rev. Edward C. Kuehnert preached.

The constitution and articles of incorporation were adopted.  Faith Lutheran Church was the name chosen by the congregation.

On February 20, 1948, the first voters meeting of the congregation elected the following officers:

Pastors who have served the congregation: